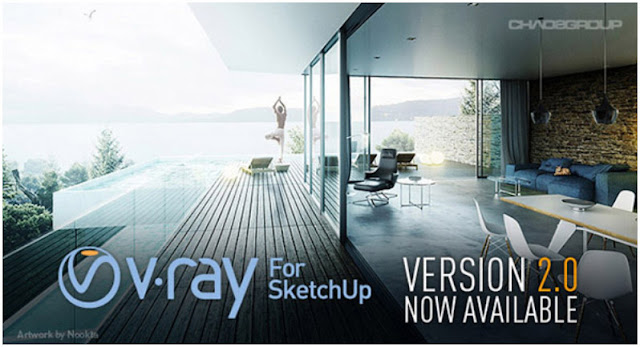 The release of the new program v-ray for sketchup 2.0, it was announced a few hours ago by Chaos Group.
Over the past three months, Chaos group had released for testing purposes, in two different phases: first v-ray 1.6 beta tester, and soon after with v-ray 2.0 beta, encouraging users to continue testing and reporting bugs.

His is the biggest expansion to V-Ray for SketchUp's rendering capabilities Which Will Provide SketchUp designers with faster rendering, better lighting tools, and the ability to create and visualize complex scenes. The combination of the V-Ray's rich feature set and SketchUp's tools and intuitive interface lets users visualize Their ideas with upmost quality and realism.

This new version Introduces dramatic improvements to workflow visualization (V-Ray RT ®), image based lighting quality (V-Ray Dome Light), and a designer's ability to quickly manage complex scenes with highly detailed models (V-Ray Proxy).
Important Note
V-Ray for SketchUp 2.0 is licensed with a hardware key (dongle).
Users who Purchased a new V-Ray for SketchUp license between April 15, 2013 and September 15, 2013 will be eligible for a free upgrade.

RENDERINING ENGINES  V-ray RT CPU and GPU
a revolutionary rendering engine providing instant feedback and streamlining scene setup. Because V-Ray RT is built upon the same robust core as V-Ray, it is seamless to transition between V-Ray RT and production rendering. For the everyday user this s a very powerful interactive rendering solution that allows them to simultaneously work and render inside of SketchUp. The instant visual feedback makes for quicker design, material, and lighting decisions.


LIGHTS  Dome Light
creates simple, artifact-free image-based lighting using the Dome Light. Its powerful importance sampling analyzes HDR images and optimizes light tracing and GI precision. This new feature will streamline your workflow when using image based lighting in your scenes. It will not only save you setup and rendering time but it will also increase the quality of the image based light and shadows.


MATERIALS
.V-Ray Material - a new compact and optimized material that includes diffuse, reflection, and refraction parameters with the ability to change the BRDF.

Wrapper Material - can be used to specify additional properties per material. Most importantly you can now create true matte materials which show the background as opposed to the base material.

VRMats Library - a new library contains an extensive collection of ready to use and photo realistic V-Ray materials.

Check here out the full list of features included in V-Ray 2.0 for SketchUp.
Find out more about the new features and watch the useful tutorials
click here on  dedicated product page.

Email ThisBlogThis!Share to TwitterShare to FacebookShare to Pinterest
Etichette: NEWSLETTER