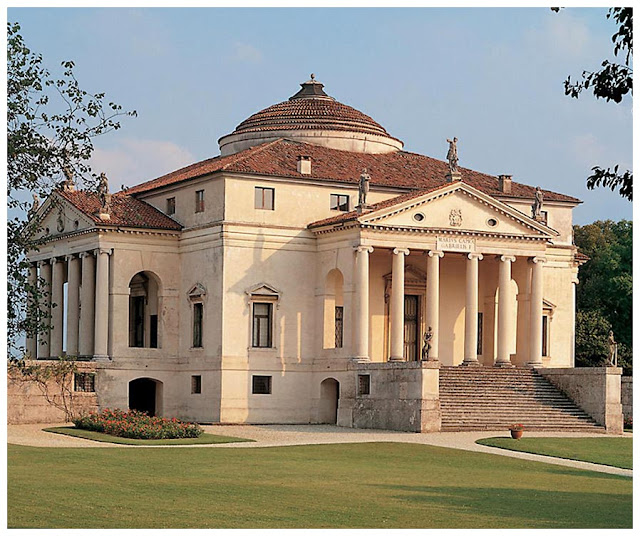 Here is the new exciting challenge that faces this time an architectural theme of the Italian Renaissance.
The model we propose is not a reproduction in 3d of a real project, but imitates the style : is a tribute to the great architect Andrea Palladio.

Anyone who wishes to participate in the challenge can do so by enrolling in the group 3D CHALLENGE , created by Nomer Adona to SketchUp Vray Resources and Rosanna Mataloni to SketchUp Texture, specifically for this purpose


Andrea Palladio  was an Italian architect, one of the most influential architects of our time. Palladio was born November 29, 1508, in Padua, and trained as a stonemason. Palladio moved to Vicenza in his early twenties. Originally named Andrea di Pietro della Gondola, he was named Palladio (after Pallade the goddess of wisdom daughter of Zeus) by the Italian poet and patron Giangiorgio Trissino, who oversaw Palladio's architectural studies. Trissino took him to Rome, where Palladio studied and measured Roman architectural ruins; he also studied the treatises of Vitruvius, one of the most important of the Roman architects

In and near Vicenza he designed many residences (Villas) and public buildings (Palazzi). He also planned several churches in Venice, San Francesco della Vigna, San Giorgio Maggiore, and Il Redentore. One of his last work was the Teatro Olimpico in Vicenza, completed after his death by architect Vincenzo Scamozzi. Palladio's own use of classical motifs came through his direct, extensive study of Roman architecture. He freely recombined elements of Roman buildings as suggested by his own building sites and by contemporary needs. At the same time he shared the Renaissance concern for harmonious proportion, and his facades have a noteworthy simplicity, austerity and repose

Palladio was the first architect to develop a systematic organization of the rooms in a house. He was also the first to apply to houses the pedimented porticos of Roman temples-formal porches defined by a shallow triangular gable (Timpano) supported by a row of columns. Both these features are exemplified in the Villa Almerico "The Rotonda". Palladio's buildings were highly functional. Palladio was the author of an important scientific treatise on architecture, I Quattro Libri dell'Architettura (The Four Books of Architecture), which was widely translated and influenced many later architects. Its precise rules and formulas were widely utilized, especially in England, and were basic to the Palladian style, adopted by  Inigo Jones, Christopher Wren, and other English architects, which preceded and influenced the neoclassical.
He died on August 19, 1580 in Vicenza, or probably at Maser (Treviso), while attending construction of the Tempietto of Villa Barbaro.

The challenge here is to respect as much as possible the architecture  What angle can you show effectively this architectural marvel? In what ways can you bring and highlight the beauty of this design? How can you creatively set up the frame of your composition in this image? Again, you are the professional in this task. Bring out the best of this model using the visualization tools in your hands  ! 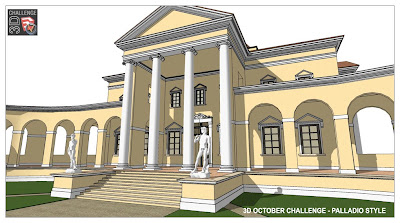 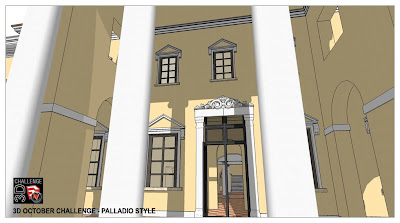 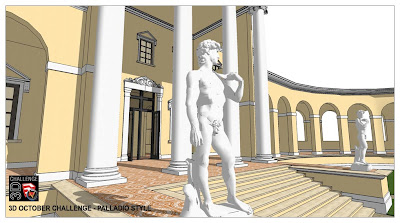 DOWNLOAD HERE THE OFFICIAL 3D MODEL
CHALLENGE OCTOBER PALLADIUM STYLE
Attention: This model is only available to the link shown

SketchUpArtists.org would like to contribute one of our exclusive black T-Shirts bearing the SketchUpArtists logo to the first place winner of the 'Palladium Style' 3D competition! So hurry and get your entries in now to get the opportunity to get your hands on one of these rare T-Shirts, last seen at SketchUp Basecamp 2012.

We will promote the winner using blogs, news, and awarding the title 3D Challenge monthly winner which is a great thing for your portfolio. The "making" will be published to sites, magazines and blogs too. Let not the material prize is the motivating factor here, rather the spirit of challenging ourselves through excellence and sharing. Through this you can earn the biggest prize.. RESPECT