PULITZER FOUNDATION FOR THE ARTS 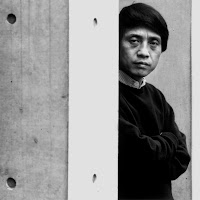 The new building for the Pulitzer Foundation for the Arts
is the first public structure in the United States
by Japanese architect Tadao Ando. 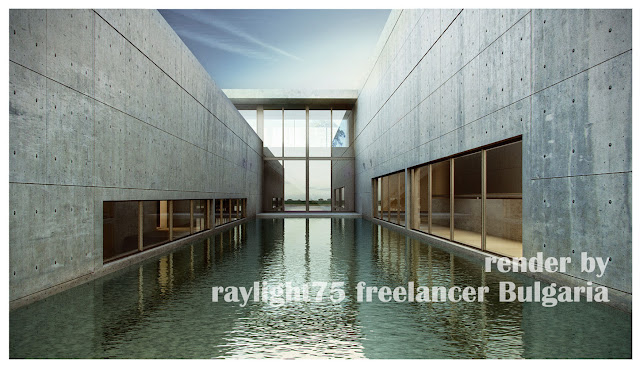 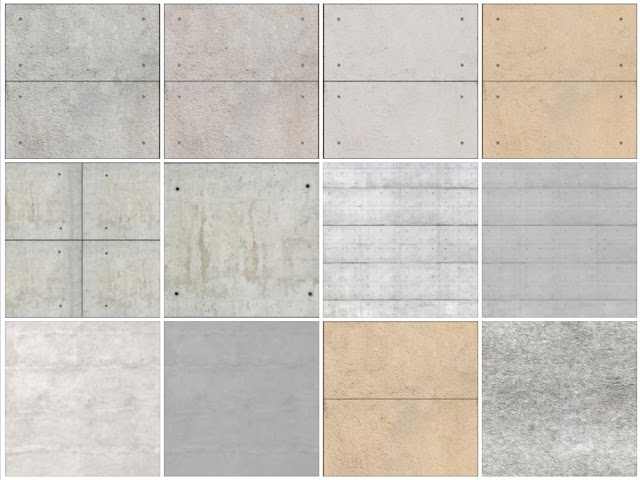 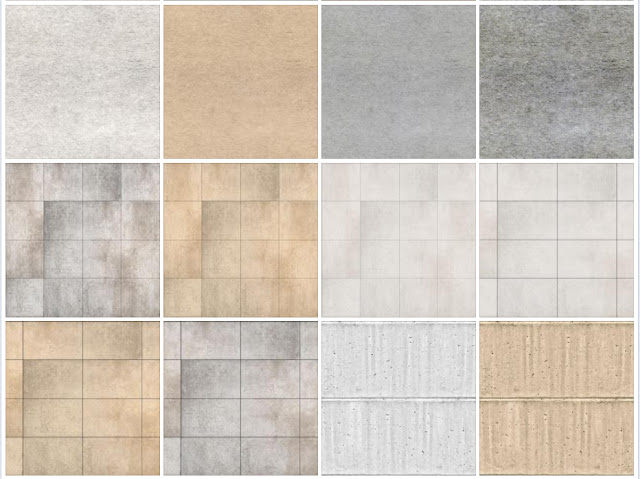 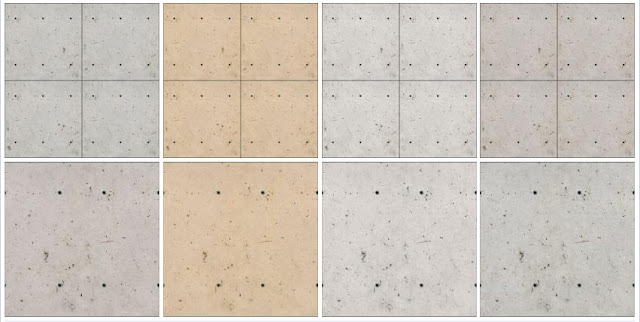 
2 -  there are no limits on the number of scenes that competitors can submit but it is important to  clearly specify, the name and surname, country , and rendering engine used. 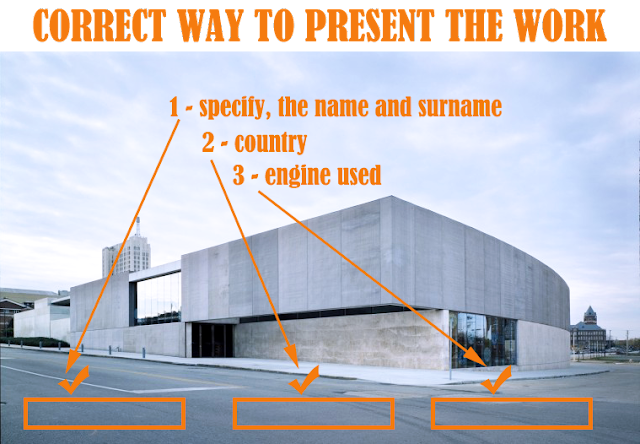 notes: The album is visible only for members of the group
album link CLICK HERE 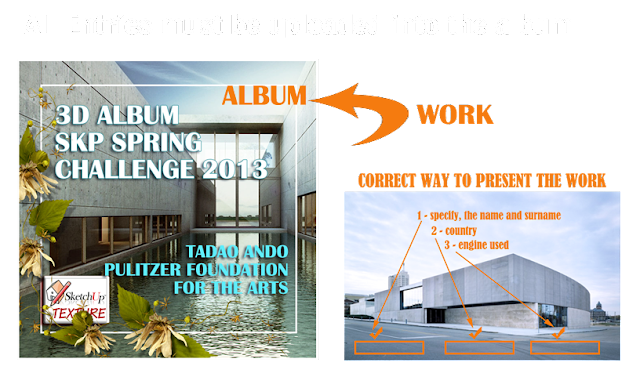 4 - deadline no later than by midnight MAY 31th italian time


ALL WORK WILL BE POSTED ON OUR BLOG
WINNERS
3 winners  Popular vote (most like).In order to create a level playing field ,
In accordance with regulations, you can vote for  your favorite render,
1 to 3 June from the Top list of 15  best works selected by the admins of the group

in addition to the above we reserve also to select a list of candidates  for the artistic interpretations more personals and particular, of course, in this case, the only constraint is the form that must be recognizable
METHOD OF EVALUATION OF THE TECHNICAL JURY

In order to create a level playing field, the jury will vote on the basis of the following criteria
Lighting 20%,
realism 30%,
composition 20%,
overall impact 30%

The new building for the Pulitzer Foundation for the Arts, designed by renowned Japanese architect Tadao Ando, is a deceptively simple composition of space and light. The PFA building, Ando's first public structure in the United States, celebrated its long-awaited opening in October, 2001. It was intended from the outset as both a serene setting for the contemplation of art and a contribution toward revitalizing the urban landscape of historic St. Louis.

Ando himself thinks of the building as a "place of possibility" or a "place of mutual discovery." He says: "I see it as the creation of a space to inspire visitors and even expand their consciousness. I want to create a very stimulating place, where works of art are not exhibited merely as specimens but also speak to us as living things."

The PFA is a 9,500-square-foot (880-square-meter) building of cast-in-place, fine-finish, reinforced concrete. It consists of two long rectangles, one of which is ten feet (3 meters) taller than the other. A cantilevered roof slab extends from the higher wing over the lower, supported by a single column. On the lower roof are a glass pavilion and roof garden. Between the two wings is a reflecting pool.
The main entrance to the building is situated along the north facade, where it is shielded from Washington Boulevard by a porch area. Double glass doors, located off-axis, admit the visitor into a low foyer and gallery in the building's west wing.

DOCUMENTATION AND IMAGES OF PULITZER
FOUNDATION FOR THE ARTS CLICK HERE 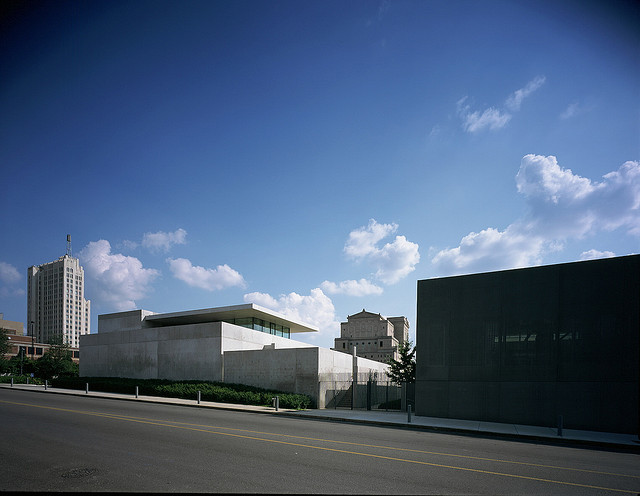 TADAO ANDO BIOGRAPH
self-taught architect famous all over the world, winner of the 1996 Pritzker Prize, considered the Nobel of architecture, received 22 April 2002 and an honorary degree from the Faculty of Architecture of the University of Rome "La Sapienza ".
It is the "first" degree of Ando that he developed his research in the field sen'za feat of academic degree nor the teaching of a master architect. Ando attributes its development to intensive reading and a high number of trips to Europe and the United States conducted to study the historical and contemporary architecture.

Born in Osaka in 1941, Tadao Ando made ​​his first family housing project in 1972, appearing on the national scene in 1976 with the accomplishments of Azuma House in Osaka, winning the annual prize awarded by the Architectural Institute of Japan.
Among the most important of these is the Children's Museum, Naoshima Contemporary Art Museum, Suntory Museum, The Museum of Literature and the Forest of Tomb Museum in Kumamoto, the Church of Light in Osaka, the Chapel on the water at Tomamu, the temple on the water to the islands Awajishima, Japan, the building Fabrica for Benetton in Treviso, the theater of Giorgio Armani in Milan in 2001, the Pulitzer Foundation, 2001 in the U.S., the Japan Pavilion at Expo '92 in Seville.

Ando writes: "Sometimes the walls manifest a power that borders on violence. They have the power to divide the space, to transfigure and to create new domains. The walls are the basic elements of architecture, but can also be the most enriching. "

"I create an architectural order on the basis of geometry: squares, circles, triangles and rectangles. I try to use forces in the area where I am building, to restore the unity between the house and nature (light and wind) that was lost in the process modernization of Japanese homes during rapid growth, during the fifties and sixties. "